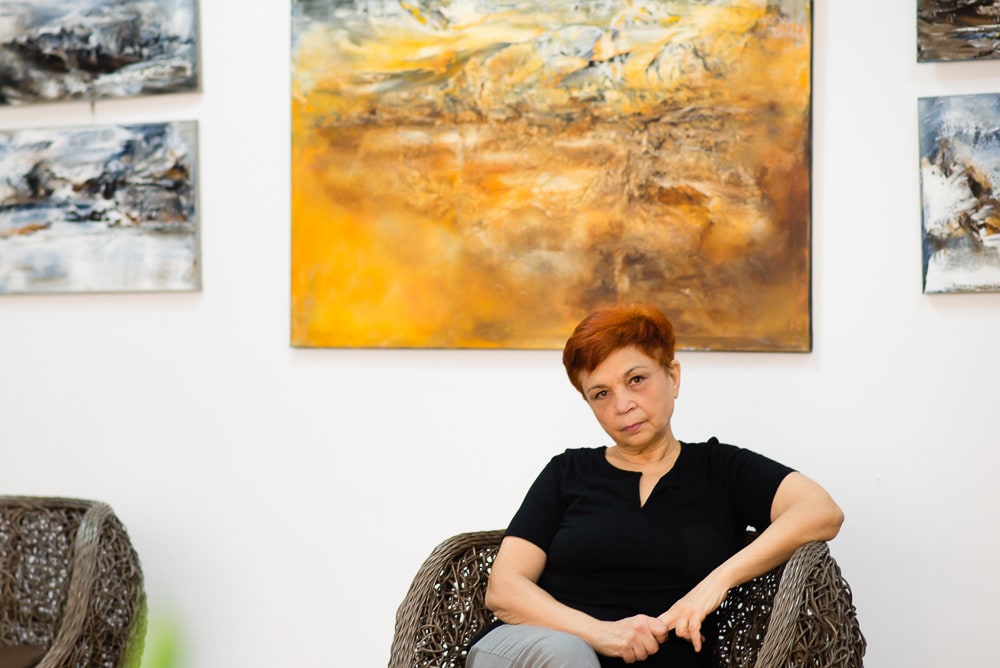 Tatyana Kudryavtseva, a talented contemporary artist travelled much within and outside the country.  The Tatyana’s creative activity was formed under the influence of western fine arts, in particular impressionism.  During her study at a university she read a lot about fine arts and learned the style of impressionists.

Tatyana says about her creative activities that:

“My schooling has not been in arts but art and beauty have been an integral part of my life until I decided to share my creations with everybody.

Mine is not realistic art. It is somehow abstract to an extent I judge is better appreciated by the viewers.”

The artworks of Tatyana Kudryavtseva are owned by private collections of Germany, Israel, and Lithuania.

In Kazakhstan the art of Tatyana was opened for wide public by the Contemporary Art Gallery Tengry Umai, namely Director of the Gallery – Vladimir Filatov, an art critic from St. Petersburg.

In 2017 an exhibition organized by Mr. Filatov took place in the “Ritz Carlton” hotel and the “Seven Club”.

Another exhibition under the title “Magic Cityscapes” was held in the Contemporary Art Gallery “Tengry Umai” wherein her works are displayed now.

Several paintings of Tatyana Kudryavtseva were accepted to the Art Future Essentai Gallery and are displayed now by the Pianos Saloon in the Essentai Mall.

Also Tatyana’s paintings were bought by the Alpha Bank from Tengry Umai Gallery.  In charity auctions held by International Women’s Club her works were awarded by and Appreciation Certificate from the Club and successively sold.

Below is one of multiple comments published by art critics and artists from abroad.

Feeling of beauty, music, unusual colour combinations – this is just what comes into my mind when I see paintings of Tatyana Kudryavtseva.

I have met Tatyana Kudryavtseva on Face Book, where she has been exhibiting her works and was very much attracted by her use of colours as well as a very unique way of using knife palettes in her works.

In her nearly monochrome works as well as the multi coloured ones she displays the imagination of an artist that touches the reality just to show that she lives on earth and conveys messages that people can understand and admire, but her style has nothing to do with copying that reality. It is a unique recreation that brings remembrances from the reality. For me it is “classical music” that comes directly from the soul. It is an abstract of a different kind that reveals shapes, and colours and emotions in a very unusual and pleasant way.

Among many thousands of artists displaying their works in the worldTatyana Kudryavtseva is a different voice, a different song and a different beautiful art to be
admired by art lovers of every age.

Ilir Fico – Artist, Member of the Federation of Canadian Artists