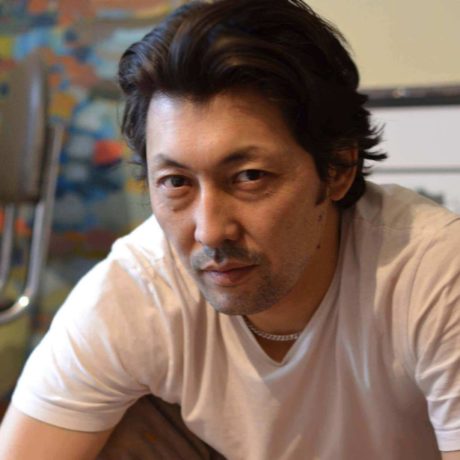 Was born in Almaty region, Kazakhstan.

Kazakh Academy of Arts of Zhurgenov, 1999

Nurlan Abishev is artist-painter, the participant of collective and personal exhibitions in Kazakhstan and abroad, the artist of cinema who has received awards at festivals in Kazakhstan and Russia, the USA, the schedule, the illustrator and also the author of several original sculptures. The artist develops several directions of the creativity at once creating as traditional Kazakh images in the pictorial and graphic works, and also experiments in abstract painting, creating bases for his own style. In Kazakhstan and in Almaty the artist is better known as the landscape writer the “singer of a city landscape of Almaty” who has sung of poetry of the urban environment and also as the artist cinema and the participant of the International “Spring full colour” exhibition, in gallery of the modern art “New York Realism”, (New York, the USA, 2011) as at this exhibition the author has received two awards gold and silver at once.

Lives and works in Almaty, Kazakhstan.

The author of a remarkable series of city landscapes which were exposed in the Central National museum of Kazakhstan in an exhibition under the name “It Seems to Me that I Am Alma-Ata” (2005-2012) and also at other exhibitions;

The author of an original, unique sculpture Eurasia (the horse sculpture made on the basis of a metal framework, inlaid with asyka) and also the sculpture of a snow leopard inlaid with crystal;

Also author of many other graphic and pictorial works.

Personal exhibition “to Syrshertpa – a creative revelation” in “The Moscow house of nationalities”, Moscow, Russia

Exhibition of young artists “Fall in Almaty” the Museum of Almaty

the Exhibition “Independence Day of Kazakhstan” Museum of Almaty

“An exhibition of young artists”,  the Kazakh National Academy of arts of T.K. Zhurgenov , Almaty

* Winner of the International festival of creative youth of “Shabyt” (Kazakhstan).

* The winner of the Kazakhstan film festival “Shaken’s Stars” (Kazakhstan), for the best work of the art director.

* The winner of the Russian film festival “Gold Hero” (Russia, Chelyabinsk) for the best work of the artist.

* The Grand Prix for the best the art decision of the movie – Cinema Shock Film festival (Russia Anapa).

* A gold medal in category “lyrics” for work “When I miss you” in the international competition exhibition SPRING IN FULL COLOR (the USA, New York).

* A silver medal in category of “realism” for work “the Canyon Charyn” in the international competition exhibition SPRING IN FULL COLOR, USA, New York, 2011.

* 2004. The art director in the feature film “aladan kelgen kyz” in Russia known as “The island of revival” (cut. Rustem Abdarshev,

* 2004-2005 the assistant to the art director Jean Franco Fumagalli in a pkinoproyekta “Nomad”,

No products were found matching your selection.